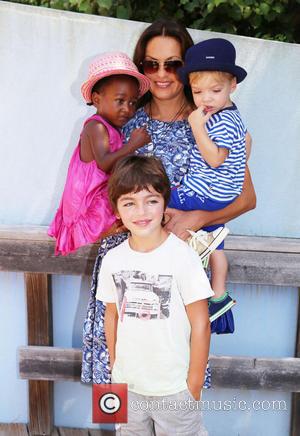 The star, who plays sex crimes detective Olivia Benson in the hit series, has thrown her backing behind a drive to encourage America's law enforcement agencies to deal with a backlog of unsolved rape cases.

Hargitay claims evidence from thousands of cases are sitting in storage untested and she wants more to be done to catch offenders.

In a blog written for the Huffington Post, she states, "The backlog allows rapists to get away with their crimes and, in many cases, to rape again... The federal government estimates that there are hundreds of thousands of untested rape kits in police and crime lab storage facilities throughout the United States. Every year, thousands of individuals take the courageous step of reporting their rape to the police.. The evidence is then collected in a 'Sexual Assault Evidence Collection Kit' - a rape kit...

"And yet, hundreds of thousands of times, a decision is made not to process the evidence. Too difficult to prosecute, too murky, too expensive - not a priority. Even when law enforcement does send a kit to the crime lab for testing, it can sit for months, and in some cases years, before being tested."

Hargitay concludes by urging fans to join the campaign through its website endthebacklog.org, while reports suggest she is also working on a documentary film to highlight the issue.