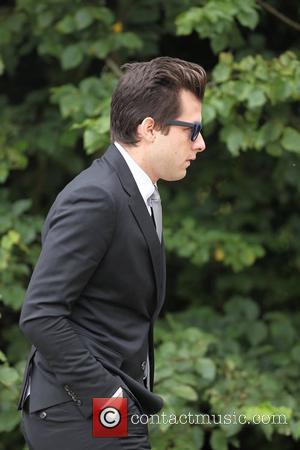 Mark Ronson, the British music producer and DJ, said a final goodbye to his close friend and collaborator Amy Winehouse, during the singer's funeral in London today (26th July 2011). Ronson was among 200 mourners at Edgewarebury Cemetery, where Winehouse's Mitch father read a touching eulogy, reports the UK's Daily Telegraph.
Arriving at the funeral wearing a sharp suit and dark sunglasses, Ronson appeared understandably dejected as he entered the cemetery gates to join the other mourners. The reality television star turned fashion critic Kelly Osbourne was also in attendance, wearing her hair in the style of Winehouse's trademark beehive. Ronson, who produced the majority of the singer's multi-award winning album 'Back to Black', tweeted of his sadness following Amy's death on Saturday, telling followers, "she was my musical soulmate & like a sister to me. this is one of the saddest days of my life". Osbourne reacted even more emotionally, tweeting, "i cant even breath right my now im crying so hard i just lost 1 of my best friends. i love you forever Amy & will never forget the real you!"
Mark Ronson's work with Amy Winehouse received six Grammy nominations in 2008, most notably 'Album of the Year', 'Best Pop Vocal Album' and 'Song of the Year', for 'Rehab'. Ronson would also go on to scoop the award for 'Producer of the Year'.