Can Mark Wahlberg Save Transformers 4 From The Razzies? 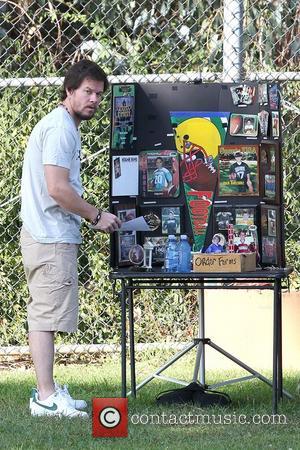 Picture: Mark Wahlberg orders his son soccer photos Mark Wahlberg at a park in Brentwood with his wife and children, watching his son's soccer practice Los...

Oscar-nominated actor Mark Wahlberg has - for some reason - signed on for Michael Bay's Transformers 4. The filmmaker announced on Thursday (November 8, 2012) that Wahlberg will play the lead in the fourth instalment of his blockbuster franchise.

It's an intriguing and potentially disastrous change of course for the actor, who proved his acting worthy with stellar performances in The Departed and The Fighter. He recently teamed up with Seth MacFarlane for the foul-mouthed comedy Ted and has been quietly executive producing the brilliant Boardwalk Empire for HBO. So why has he signed on for Transformers, which got old exactly three films ago? Bay seems to have an idea, writing on his blog, "Mark is awesome. An actor of his caliber is the perfect guy to re-invigorate the franchise and carry on the Transformers legacy". At least he accepts that it needs reinvigorating, though can anyone really inject life into a franchise that has been nominated for a Razzie for its last two movies? Transformers: Revenge of the Fallen actually won Worst Movie in 2009, while Dark of the Moon got off lightly in 2010 thanks to the putrid Jack and Jill, starring Adam Sandler. Bay added, "It's tough to find someone who's done these kind of movies, and to have the complication of creating the new stuff that needs to be in this movie - not just characters but a new type of action"

Transformers 4 will hit theaters on June 27, 2014. Which means Wahlberg has about 18 months to pull out.