Maroon 5 Frontman Adam Levine Is Developing A Tv Series Based On His Wedding Crasher-themed Music Video For Hit Song Sugar. 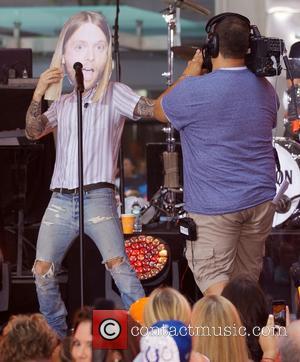 The Moves Like Jagger stars gatecrashed various weddings throughout Los Angeles last December (14), secretly setting up their instruments for an impromptu performance.

The stunts were recorded for the promo of their single, and it has since reached nearly 1 billion views online, and now Levine, who has a development deal with bosses at America's NBC network, has teamed up with Wedding Crashers director David Dobkin to create a pilot for a show using the same stunt.

According to Deadline.com, the producers are collaborating with expert improv comedians to help stun unsuspecting superfans who will be surprised by their favourite celebrity at a major event in their lives.

News of Levine's new project comes weeks after NBC bosses decided not to go through with the singer's plans to develop a 1970s-set TV miniseries about the music industry.