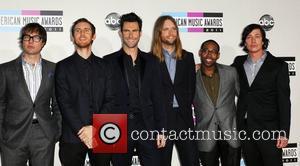 Maroon 5 have made pop chart history in America by becoming the first band to top 490,000 digital download sales in a week.
The group's Payphone has come crashing into the Billboard Hot 100 at number three, challenging Aussie singer Gotye, whose Somebody That I Used To Know scores a second week at the top of the countdown.
The 493,000 sales logged by singer Adam Levine, his bandmates and guest Wiz Khalifa is almost 30,000 more than the Black Eyed Peas, who set the digital downloads record for groups in 2009 with Boom Boom Pow.
Flo Rida still holds the ultimate sales marker with 636,000 from the week of 28 February in 2009.
Fun's former number one We Are Young stays put at two on the new chart, while Justin Bieber's Boyfriend rises to four and The Wanted's Glad You Came rounds out the Hot 100's top five.