In 2041, mankind has managed years of living side-by-side with robots. Álex (Daniel Brühl), is a renowned cybernetic engineer, returning to Santa Irene after a ten-year departure. Once there, he is reunited with David (Alberto Ammann), his brother, to help with the final stages of the most advanced robot on the planet. David and his wife, Lana (Marta Etura), have successfully created a robot child, named Eva (Claudia Vega). The problem is, Álex’s arrival drags up history between he and Lana, and there is also a special connection he shares with Eva. Family, love, and humanity will be tested by the events that follow.

Even though the central character is somewhat undefined, this film is a thorough creep-out, playing on our vulnerabilities while making the villain the most sympathetic person on-screen. Balaguero is one of the directors behind the [Rec] series, and knows how to unsettle his audience with atmospheric, skin-crawling sequences that are made especially visceral due to the realistic acting.

An impressive presence in the prison thriller Cell 211, the Bolivian political drama Even the Rain and as a drug kingpin in the Miami Vice movie, Spanish actor Tosar stars as Cesar, the likeable doorman at a creaky Madrid apartment block. But he secretly despises the residents, and is quietly destroying their lives, tormenting an elderly woman (Martinez) and her two beloved dogs, brutally threatening a young girl (Almeida Molina), and casting suspicion on mother-and-son cleaners (Fernandez and Morilla). But his biggest plan is for Clara (Etura), the sexy young woman in flat 5B. And while her boyfriend (San Juan) is away on business, he lurks in the shadows of her apartment plotting something unspeakable.

Director Balaguero keeps the film on low boil, refusing to explain everything in the plot while quietly twisting the moody tone. Every scene is a bundle of insinuation that suggests something truly nasty, and it's refreshing that Tosar never tries to make us understand what Cesar is up to: we see why everyone likes him, and also why they should be terrified of him. We only ever get a vague idea of his overall plan, but the things he does along the way are sinister enough to keep us nervous. As are hints that he may have done this before.

It's December 2004 and a young mother and father take their three sons on a paradise vacation to Southeast Asia where they are not far from white sandy beaches and a clear blue ocean - a far cry from the freezing winter temperatures back home. One day, whilst the Maria relaxes by the pool, watching husband Henry play ball with the kids, an ominous, trembling noise can be heard getting closer and closer. Before the family, and other vacation-goers, have time to run for their lives, they suddenly find themselves caught in one of the most horrific natural disasters of the generation; the tsunami resulting from the earthquake of the Indian Ocean. Miraculously, the family survive; Henry drifts back to consciousness with an overwhelming fear when his children are nowhere to be seen, though it is not long before his two youngest discover him. Maria and the eldest, Lucas, have drifted elsewhere and Henry vows to search every shelter and every hospital for them. They are so far unharmed and are found by some locals who take them to a nearby hospital. Maria sends Lucas off to help people find their families and finds his own along the way. 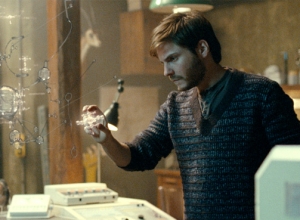 In 2041, mankind has managed years of living side-by-side with robots. Álex (Daniel Brühl), is...

Even though the central character is somewhat undefined, this film is a thorough creep-out, playing... It's December 2004 and a young mother and father take their three sons on a...