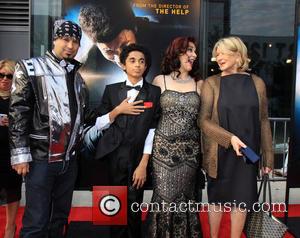 Picture: Martha Stewart, Tomi Rae Brown and James Brown II - New York premiere of 'Get On Up' held at The Apollo Theater - Arrivals -...

Lifestyle guru Martha Stewart is mourning the loss of her younger sister, Laura Plimpton, who died from a brain aneurysm on Tuesday (05Aug14).

Stewart shared the devastating news in an email to the staff at her lifestyle company, where Plimpton worked in a senior position for more than two decades.

In the letter obtained by the Daily Mail, Stewart wrote, "My youngest sister, and the youngest of the six Kostyra siblings, Laura Kostyra Plimpton, passed away today in Norwalk Hospital. Laura worked for me and the company for more than 25 years."

Stewart went on to reveal that Plimpton began to feel unwell after working out on Tuesday morning, and called on her husband Randy, to take her to the local hospital, where she later died.

Stewart continued, "She was an extraordinary employee, mother, wife and sister. We are so sad but also happy that Laura had the foresight to donate so many healthy organs to needy people."

Plimpton, a mother of three, stood by her older sister's side when she was sentenced to five months in prison for lying to U.S. federal agents investigating insider trading.

During an interview on U.S. talk show Larry King Live in 2004, Plimpton gushed about her "very special relationship" with her sister.

She said, "All I wanted to do was be around her, her husband, and then when Alexis (Stewart's daughter) was born, I just wanted to take care of Alexis. I would pack my little suitcase and go every weekend, practically, just to be with Martha."