The Hobbit Movie Was A "Good Omen" For Martin Freeman 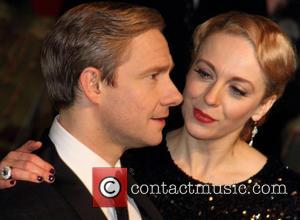 The Hobbit movie, or The Hobbit: An Unexpected Journey to give it its full title, is currently doing the rounds in cinemas across the globe and whilst not everybody is a fan, one person who was fervent before filming had started was the film's star Martin Freeman.

In a recent interview with Radio Times, Freeman revealed that he saw his part in the film as being a "good omen,' largely down to the fact that he has an uncanny resemblance to actor Ian Holm, who played the role of Bilbo Baggins in the Lord of the Rings films. He told the magazine, "When I was having my face cast [for prosthetic ears], I was told that the dimensions of Ian's and my face are almost identical, which they thought was a good omen."

A film as colossal an undertaking as The Hobbit proved to be needs all the good omens it can take, so it's a good thing Freeman was there to fill in that particular one. If you ask us, Freeman was always the perfect choice for the role of Bilbo, and his performance in the film has all but proved that anyway.

Still, there was a high chance that Freeman would not be the man to play Bilbo in the films. He went on to tell the magazine that he almost had to turn down the role due to filming schedule conflicts. Freeman, who stars in the hit BBC show Sherlock, almost had to say no to Peter Jackson, but Jackson was apparently so determined to have Freeman play the lead role in his film that he held off filming for a few weeks to ensure the actor to star in the film. Freeman went on to tell the magazine, "There was a period when I had to watch it sail away, so to speak ... It looked like I couldn't do it because of filming for the second series of Sherlock. So with a heavy heart I had to pass it on for a while."

The Hobbit: An Unexpected Journey is in cinemas now.