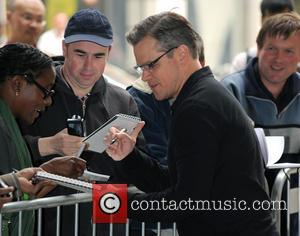 Oscar winners Matt Damon, Michael Douglas, Robert De Niro and Christoph Waltz have teamed up for a new video, in which they urge U.S. leader Barack Obama and Russian President Vladimir Putin to imagine a world without nuclear weapons.

The actors join Morgan Freeman, Naomi Watts, Alec Baldwin, John Cusack and Danny DeVito, among others, in the new Global Zero public service announcement, which has been released to coincide with the G8 Summit in Northern Ireland, where world leaders will meet to discuss arms and international defence next week (17-18Jun13).

The video is part of an international campaign urging Obama to set the world's course to zero nuclear weapons by negotiating further cuts in the massive U.S.-Russian Cold War stockpiles and bringing other leading nuclear powers into negotiations for the first time in history.

Douglas leads off the short film and says, "The message from national security experts and citizens around the world is clear: the only way to eliminate the global nuclear danger is to eliminate all nuclear weapons. It's time to set the world's course to zero."

Freeman adds, "Nuclear weapons are obsolete relics of the Cold War; they do not address today's security threats, and they cost $1 trillion per decade globally. It's time we get rid of them."

As part of their new initiative, Global Zero officials have delivered a letter to the White House from over 70 former prime ministers, foreign and defence ministers and military commanders, which features an official declaration recently adopted by the European Parliament endorsing Global Zero's plan to eliminate nuclear weapons.

In recent weeks, a host of actors and musicians, including Leonardo DiCaprio, Paul MCCartney, Tom Morello, Yoko Ono, Serj Tankian, Pearl Jam and R.E.M. have have promoted the campaign on social media.