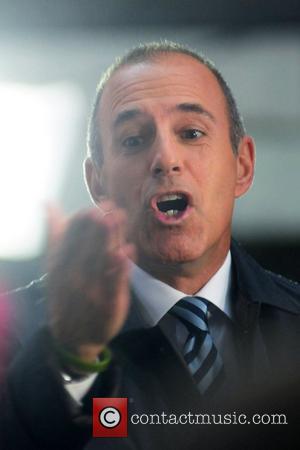 There could be trouble ahead for NBC’s Today show. The breakfast programme is already suffering with flagging viewer figures and has been a talking point, ever since Ann Curry’s departure earlier this year. Now, host Matt Lauer is said to be furious at the appointment of Alexandra Wallace as the show’s new executive producer.

According to RadarOnline, there have already been some rather terse discussions between the two, regarding the future of the show and what’s more, Wallace is known to have a pretty close relationship with Ann Curry. Curry and Lauer, for the record, do not get along, it would seem. A source has told RadarOnline “Matt Lauer is NOT happy that Jim Bell who had been the executive producer of the Today show since 2005 has been forced out… Alexandra Wallace, who will be Bell's replacement, and Matt have never had a good working relationship. Matt doesn't like the fact that Alexandra is a big advocate of Ann Curry's.” Sounds as though there could be some frosty times ahead. Just cast your minds back to the moment that Matt had to introduce Ann’s segment as she reported from the London Olympics. It was pretty obvious back then that there was no love lost between them.

The source also confirmed that Wallace intended to “shake things up on the show” so that they could get it back on top of the ratings. The outgoing executive producer, Jim Bell, has been blamed for much of the show’s recent ill-fortunes.