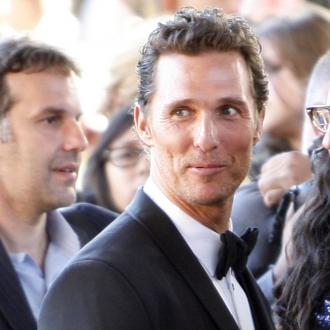 Matthew Mcconaughey has almost returned to his normal weight.

The 43-year-old actor - who sparked concern after he recently dropped 38 pounds from his already lean frame for his role as an AIDS patient in the new movie 'The Dallas Buyer's Club' - has revealed he is just five pounds away from his goal weight of 165 pounds and is looking forward to having more energy to play with his children.

The father-of-three - whose wife Camila Alves recently gave birth to a baby boy Livingston, told People.com at the New York Film Critics Circle Awards dinner: ''I have less (physical) leverage, but my mind is way sharper.

The actor also revealed that he followed through on his plans to indulge on a cheeseburger once filming for the movie was completed.

He said; ''That was it. I got the cheeseburger, and then I sat there for 25 minutes and doozied it up''.

Matthew - who is also father to son Levi, five, and daughter Vida, three, - previously revealed that his extreme weight-loss had taken a toll on his health.

He said: ''Your organs [and] muscles shrink, your organs shrink [and] my stomach has shrunk as well.''