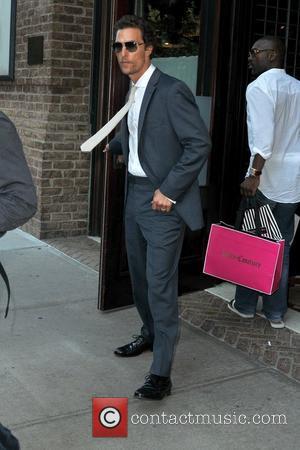 Picture: Matthew McConaughey seen out and about in Manhattan New York City, USA - 24.07.12

New pictures of Matthew Mcconaughey have emerged, with the actor looking gaunt and unwell, for a new film role. The Paperboy actor is soon to be starring in The Dallas Buyers Club, alongside Hilary Swank and Nicole Michele Sobchack and will be playing the role of a man diagnosed with Hiv. The film is set in the 1980s, at the height of the Aids epidemic.
US Magazine have published pictures of the 42 year-old actor, looking particularly gaunt, even if he's still rocking an impressive tan. He's never exactly been weighty, but he's definitely shed a lot of weight, in dedicated preparation for the movie role. Earlier this year, MCConaughey told US Weekly "I'm playing a guy who was sick and would have loved to have been healthier but wasn't. For me, it's more of a mental thing than a physical thing. I'll get down to the weight I need to get to. I'm on my way, and it's what I need to do for the job." He also told Larry King that he's been "drinking lots of tea" in order to shed the 30 pounds that was required of him and told the TV presenter "It takes a while for your body to understand that it has to feed off of itself, and that you're not going to give it something else from the outside. I should not look healthy by the time I'm doing this."
Of course, Matthew isn't the first high profile actor to drop their weight dramatically for a film role; Anne Hathaway also had to starve herself, for her role in 'Les Miserables' and Christian Bale looked decidedly skeletal when he played an insomniac in The MAChinist back in 2004.