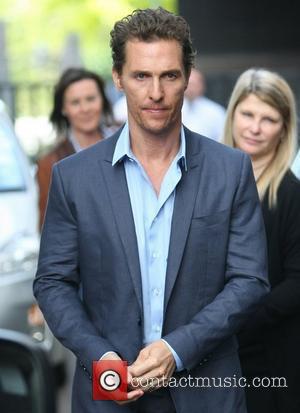 Actor Matthew Mcconaughey is shedding the pounds to play a gaunt Hiv victim in upcoming movie The Dallas Buyers Club.
The actor is set to portray real-life American cowboy Ron Woodruff, who smuggles life-saving drugs across the Mexican border after contracting the disease during the 1980s.
The project is due to begin filming in September (12) and now MCConaughey, who recently beefed up to play a fit male stripper in Magic Mike, has been forced to slim down for the part.
He tells U.S. newsman Larry King's new Ora TV web series, "I'm losing some weight. I've got a role coming up in the middle of September. I've lost about 15 pounds, I've gotta lose about 15 more. I should not look healthy by the time I'm doing (filming) this."
The 42 year old still has a long way to go and the hard-working star admits the strict diet has already taken a toll on his health, adding, "It's a bit of a spiritual cleanse, mental cleanse. (I'm) drinking a lot of tea. It takes a while for your body to understand that it has to feed off of itself and that you're not going to give it something else from the outside."