Matthew Mcconaughey and wife Camila Alves welcomed their third child last month, and the actor reveals juggling three kids is like a circus. 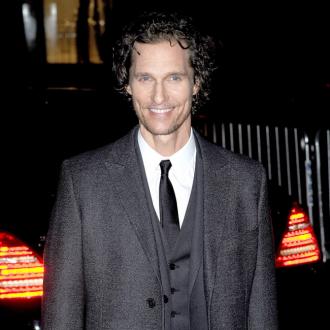 Matthew Mcconaughey says having three kids is like a ''circus''.

The 'Magic Mike' star and his wife Camila Alves welcomed their son, Livingston, into the world in December, and he admits having a newborn and two other children, son Levi, four, and daughter Vida, three, has made life chaotic for the couple.

Speaking to Access Hollywood on the red carpet at the New York Film Critics Circle Awards on Monday (07.01.13), he said: ''It's getting to be more of circus that's for sure!

''Another plate at the table. Actually he's not eating at a plate, he's on mama because he's only 10 days old.''

The 43-year-old actor gushed about his daughters, as well as his new son, when quizzed if the third time was the charm.

He added: ''The first time and second time were charming too. I promise you.''

The usually toned star looked gaunt at the ceremony as he has lost a staggering amount of weight for his role as HIV patient Ron Woodruff in upcoming drama 'The Dallas Buyers Club', but is now beginning to put the weight back on after filming ended.

He said: ''I've gained 25 pounds since I ended that role. So I was 135 and I'm 160 today. There wasn't much to see in the mirror while filming. I didn't think I looked that much different, but when I look back at pictures I did. I did.''