Matthew Mcconaughey's wife Camila sneaked onto the 'Magic Mike' set to watch him strip - and enjoyed his performance. 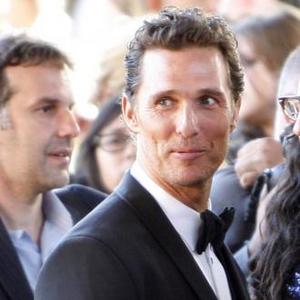 The 42-year-old actor - who married long-term girlfriend Camila Alves last month - had no idea she had sneaked onto the film set to watch his raunchy routines as exotic dancer Dallas and admits he was relieved he had no idea she had gotten so close to his performance.

He said: ''I didn't know she was there. She had sneaked in at the back and I'm glad I didn't know because I would have been even more nervous than I was. But I got it done and she enjoyed it. She gave me the thumbs up.''

Matthew admits he was initially ''scared'' at the thought of stripping but knew he would regret it if he didn't take the plunge.

He explained to the Daily Mirror newspaper: ''I got scared at the idea of stripping on stage. But I said, 'I'm probably going to be in one male stripper movie in my life and, if I don't do it, I'm going to regret it.' So I walked the plank.

''It was nerve-racking to dance in front of everyone live. Then having to strip down was even more nerve-racking. The biggest challenge wasn't the dancing, it was The Tiny thong.''