Backstreet Boys star A.J. McLean has revealed he and his wife Rochelle DeAnna Karidis tried to sneak out of their wedding early but their plan was scuppered by the guests. 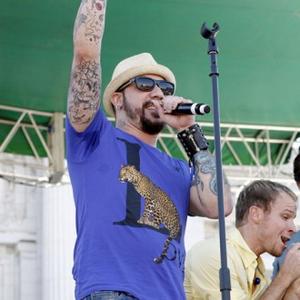 A.J. McLean and his new wife tried to sneak out of their own wedding early.

The Backstreet Boys singer tied the knot with Rochelle DeAnna Karidis last month and while they had a tremendous day, they tried to leave the nuptials at the Beverly Hills Hotel early but their plan didn't go as planned.

He said: "We actually tried to sneak out early, but my dumbass stopped and talked to everyone on the way out the door.

"Once we got back in our hotel room, we just crashed on our couch, exhausted and starving, and took it all in.

"We ordered room service then went straight to sleep. It's been a whirlwind, this is huge. And of course the next big thing is kids."

While the couple are hoping to have children, they are planning to wait a while so they can enjoy being a married couple first.

Rochelle to Britain's OK! magazine: "I'm not getting broody yet. I'm OK with waiting for a couple of years. We definitely want to get settled into marriage first. Being a parent is a lifelong job."

The 33-year-old loved the jokes at his expense because it's what he expected on his wedding day.

He said: "They said they were going to roast me and they teased me a bit, but mostly they gave me words of wisdom and encouragement. Nick's speech was the weirdest. He called Rochelle Lydia and said we were characters from 'Beetlejuice'.

"I loved the speeches by my best man Chris and Rochelle's maid of honour and her sister Priscilla as well. Let's just say Rochelle and I were sober at the wedding - no one else was."