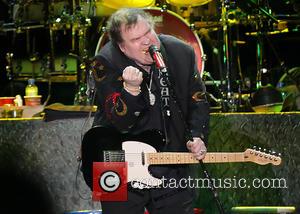 Rocker Meat Loaf is reteaming with two of his most famous duet partners to record a new Jim Steinman track.

The singer and his mentor and composer have teamed up to work on new music and Meat Loaf has already secured the services of Ellen Foley, who he worked with on the hit Paradise by the Dashboard Light, and Karla DeVito, who became his sidekick on the Bat Out of Hell tour.

The rock star tells BroadwayWorld.com, "I am gonna get Karla and Ellen and then I am going to talk to Jimmy and see whether he wants to use Bonnie Tyler or the girl who did Anything For Love, Lorraine (Crosby).

Foley and DeVito will join Meat Loaf on the track Braver Than We Are.

Meanwhile, the rocker also has his sights set on a reunion with Cher.

He adds, "I have seriously considered re-recording Dead Ringer (For Love) three or four times now... but, I'd have to have Cher again if I did it. I don't know where those original tapes are - if I did, I would use those tapes and pull Cher off. If I could find those tapes I'd do it! I sing better now than I did in '81."