Megan Fox begged wardrobe assistants on the set of new film 'Jonah Hex' to breach health and safety regulations by doing her corset up so tight that she was left with an 18-inch waist. 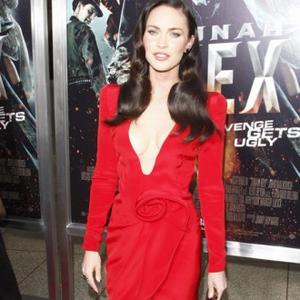 Megan Fox begged her assistants to do up her corsets as tightly as possible in new film 'Jonah Hex'.

The 24-year-old actress - who plays a prostitute in the Wild West flick - admits she pleaded with stylists on set to breach health and safety regulations by lacing up her corset extra tight.

She said: "They really didn't want to lace me up too tight even though I was loving it and I wanted them to.

"They kept saying how I could pass out and that they were not allowed to, but I did get them to lace me in so my waist was like 18ins."

However, the brunette beauty - who was recently left the 'Transformers' film franchise in favour of British model Rosie Huntington-Whiteley - admits she had to let them loosen the restrictive garments when taking part in many of the film's action scenes.

She added to Absolute Now: "For the action scenes though, I had to have it loose because they were convinced I was going to faint."