Megan Fox Felt Destined To Be With Brian

Megan Fox believes she and husband Brian Austin Green were ''destined'' for each other and she knew instantly that he was her ''soulmate''. 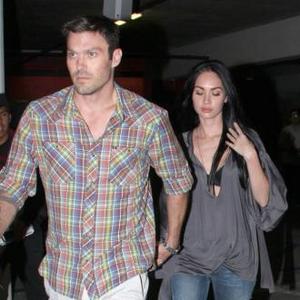 Megan Fox believes she and husband Brian Austin Green were ''destined'' for each other.

The stunning actress met the former 'Beverly Hills 90210' star in 2004 when she was just 18 and she says she knew he was The One for her, despite their 12-year age gap.

Megan - who is currently pregnant with the couple's first child - said: ''The first time I saw him I got butterflies. The first time he casually touched me, there was so much electricity. I truly feel like he's my soulmate. We're destined to live this part of our lives together.''

Megan - who married Brian in 2010 in Hawaii following a brief split - also says being a stepmother to Brian's 10-year-old son Kassius makes her extremely happy.

She told Now magazine: ''A lot of things make me happy. But I feel unbelievably happy when my stepson tells me I'm beautiful. When I started living with Brian, his son was only two and I was 18. I've been looking after Kassius since he was three - it's part of my world that very few people really ever understood about me. I love being a stepmom and the experience grounds me when nothing makes sense in my life.''