Megan Fox has revealed she is having her Marilyn Monroe Tattoo removed because she the late screen icon is a ''negative character''. 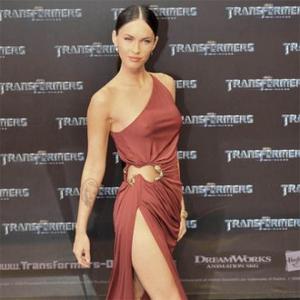 Megan Fox is removing her Marilyn Monroe Tattoo because it has "negative energy".

The 25-year-old actress has an inking of the late screen icon's face etched on the inside of her right arm but she is in the process of having it lasered off because she no longer wants an association to Marilyn - who died in August 1962 aged 36 from a suspected drugs overdose.

She told Italian magazine Amica: "I'm removing it. It is a negative character, as she suffered from personality disorders and was bipolar. I do not want to attract this kind of negative energy in my life."

The tattoo of the 'Some Like It Hot' star is not the first change to her body that Megan has been left unhappy with.

The 'Jonah Hex' star - who is married to actor Brian Austin Green - also got rid of a belly-button piercing when she was 20.

She said: "I did it when I was 16 because I was a fan of Britney Spears. The only time I tried to imitate someone else.

"But then I thought it was tacky and so I removed it when I turned 20."

Megan has at least eight other tattoos, including a quote on her shoulder which reads "We will all laugh at gilded butterflies" and a tribute to her 'Passion Play' co-star Mickey Rourke on her right rib cage which states "Those who danced were thought to be insane by those who could not hear the music."

Revealing the meaning behind her Marilyn tattoo, Megan previously said: "I really admire Marilyn Monroe, but I would never try to emulate her. I got the tattoo as a warning. It warns me not to let myself be treated so badly by the film industry so that it breaks me down."