The 27 year-old actress brought in photographs of her two sons, Bodhi and Noah, while appearing on 'The Ellen DeGeneres Show' on Monday (May 5th). 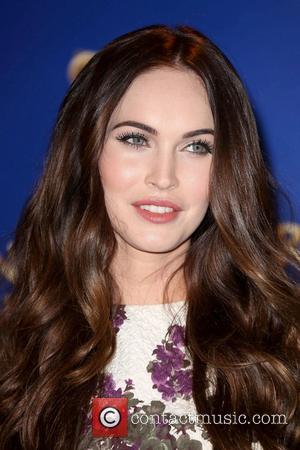 Megan Fox is a proud mother.

The Hollywood star looked better than ever when visiting 'The Ellen DeGeneres Show' on Monday (May 5th), even though she only gave birth sixteen months apart.

While appearing on the talk-show, Fox took this opportunity to introduce her two sons, 2 month-old Bodhi, and Noah (19 months), to the public for the first time.

"The first time I was here I was pregnant, and no one knew it," the 27-year-old actress told the host, who has been married to the boys' father, Brian Austin Green, since 2010.

"Then the second time I just had my baby," she continued. "But I got pregnant again so you're sort of like a fertility good luck charm."

"Ah, yes. My show is an aphrodisiac," Ellen jokingly replied before asking, "So, the new child is a girl?"

Fox, who has kept her lips sealed about her second son until now, reportedly gave birth to Bodhi this past February.

"They're two years apart?" Ellen asked about her children. "Not even," Fox said. "They're 16 months apart."

As soon as the photos of her sons were displayed on-screen, the 'Transformers' actress couldn't help but gush about them. "Bodhi is the little chubby one, and then Noah is the one with the lips," she boasted.

"Those are beautiful," the daytime talk-show host commented. "No wonder you just keep having children. They're gorgeous like that."

Even though Fox is a proud mother, she does admit none of the boys were planned, which may explain why the time between each birth is relatively short.

"The first one wasn't planned either and I mean, we can't let Brian near me anymore," the 'This Is 40' actress joked.

But the most recent unexpected pregnancy nearly became a big issue when she began filming 'Teenage Mutant Ninja Turtles'.

"I got pregnant with Bodhi two weeks into filming 'Ninja Turtles,' which is an action movie and requires a lot of running and jumping and stunts ... [and] anybody who's been pregnant knows your first trimester can be pretty rough and you're nauseous all day long," she said. "So I spent the whole shoot - basically, the producers would come see me in the morning in the makeup trailer and I'd be clinging to a box of Saltines and we kept pickles in the refrigerator for me and I was just constantly on the verge of vomiting."