Mel B surrounded by bikini babes on birthday

Mel B celebrated her 38th birthday surrounded by bikini babes at Las Vegas' Wynn Encore hotel as she partied the day away by the pool, before heading out for a meal with husband Stephen Belafonte. 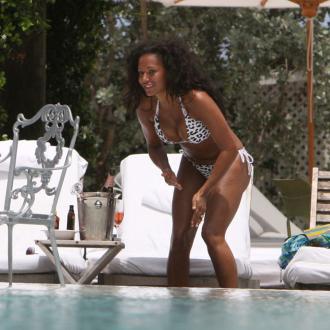 Mel B celebrated her 38th birthday surrounded by bikini-clad babes in Las Vegas.

The toned and tanned star flaunted her body at the city's Wynn Encore hotel as she posed with a bottle of champagne surrounded by scantily clad staff from the hotel's bar outside her private second-floor bungalow on Saturday (01.05.13).

Mel - accompanied by her husband, Stephen Belafonte - then sprayed the waitresses with the luxurious French sparkling wine, before taking the party down to the pool.

The celebrations continued into the evening, with Mel - who has recently joined the judging panel of 'America's Got Talent' - and Stephen dining at Andrea's. There they enjoyed an enormous platter, which included chef Joseph Elevado's shishito peppers, shellfish platter, wagyu and lobster roll, and five-spice lobster before Mel was presented with a birthday cake.

The couple then took their party to Surrender nightclub, where Lil Jon and Sidney Samson were DJing.

She recently told the Las Vegas Sun newspaper: ''It's a birthday celebration and work combined.

''Las Vegas is the place where the winner will end up with their own show. So a $1 million prize and their own headliner show. So it's perfect to be with you to kick it all off.

''It's the perfect test of how life could actually be. If you haven't been to Las Vegas already, everyone needs to go to Las Vegas in their lifetime.

''I've always enjoyed my time in Las Vegas a lot.''