Veteran Entertainer Mel Brooks Was Feted With The British Film Institute's (Bfi) Fellowship During A Star-studded Event On Friday (20mar15). 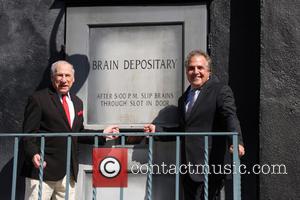 The Grammy, Emmy, Oscar, and Tony award winner was presented with the organisation's highest honour during a private dinner in London, paying tribute to his outstanding achievement in film and television.

John Hurt, who has appeared in a number of Brooks' films including Spaceballs and A History of the World Part 1, spoke about his friend at the event, which was also attended by Terry Gilliam, Mike Leigh, Simon Pegg and Salman Rushdie.

During his acceptance speech, Brooks said, "I am deeply honoured to be the recipient of the BFI Fellowship and to be inducted into such distinguished company.

"When I was informed that I had been chosen, I was surprised and delighted. Not many Americans have been offered this prestigious award... and for good reason."