Mel Gibson broke ex-girlfriend OKSANA GRIGORIEVA's teeth when he punched her twice during a violent row, it has been claimed. 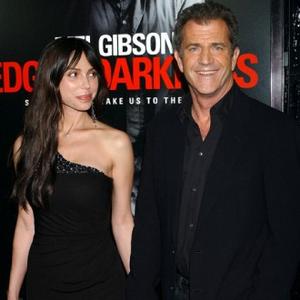 Mel Gibson knocked his ex-girlfriend's teeth out during a violent row, it has been claimed.

OKSANA GRIGORIEVA filed for a restraining order against the 54-year-old actor last week and though the exact details of the document are being kept hidden, friends of the Russian singer - who has an eight-month-old daughter, Lucia, with Mel - say she took legal action in a bid to protect herself.

One pal told gossip website TMZ: "She tried to protect the baby during one of Gibson's violent episodes when he punched Oksana in the face two times, breaking her teeth and giving her a concussion.

"The true facts will be brought out in a court of law. Oksana will continue to abide by the ethical obligations and rules arising from a confidential paternity action and will let the court decide the issue in this matter."

Though Oksana hasn't commented on the speculation her former partner was violent, she has claimed the 'Passion of the Christ' star is not giving her any money towards the upkeep of their daughter.

She said: "He is not paying me a penny. Nothing. I am having to live on credit cards and borrowed money. It is not a good situation."

The 40-year-old beauty also hit out at reports claiming the actor filed a restraining order against her, insisting she wanted their split handled "with dignity".

"There are so many lies being said about me. I was trying to keep things dignified and be respectful to the father of my daughter, but what he is doing is cruelty.

"The truth will come out eventually. There are custody issues. What is happening to me is not fair."

Oksana and Mel separated in April, but the singer - who has a 12-year-old son Alexander with actor Timothy Dalton - insists she ended their relationship.

She added: "He didn't dump me, I left him. I rescued my children and myself."

Mel's spokesperson has declined to comment on his ex-girlfriend's claims, but friends of the star insist he was never violent towards her.