Mel Gibson's ex-partner, OKSANA GRIGORIEVA, has been offered a ''full nude'' spread in Playboy magazine for $75,000. 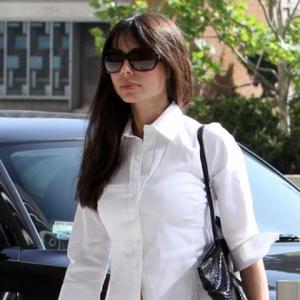 The Russian singer - who has an 11-month-old daughter Lucia with Mel - has been offered $75,000 to pose naked in the magazine, which has stated if she accepts they will put her on the cover, according to gossip website TMZ.

Oksana is yet to make a decision, but the 40-year-old beauty is facing mounting legal costs in her bitter battle with Mel over custody of Lucia.

Despite this, Oksana has previously turned down a $15 million settlement offer from Mel, 54, because he wanted shared custody of their daughter.

She said: "The $15 million was a proposal that I walked away from because he wanted 50 per cent custody of an infant when he's unstable."

The couple split in April, with her accusing her ex-lover of domestic abuse. It has previously been reported that Oksana demanded $40,000 a month from Mel in child support.

As well as paying for Lucia, Mel presently also pays for the luxury Los Angeles home where Oksana lives with her daughter and her 13-year-old son, Alexander.

According to reports, Mel's lawyers insist some of Oksana's requests - such as he pays for bodyguards - are unnecessary as Lucia is still just a baby. He has previously offered her $6,000 a month as child support.