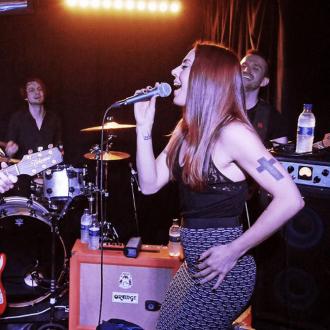 The 40-year-old singer recently teamed up with the 'Move' hitmakers for a Sport Relief video for their single 'Word Up' and praised the band who are following in the footsteps of her and band mates Victoria Beckham, Mel B, Geri Halliwell and Emma Bunton.

She told BANG Showbiz: ''It was great filming with them, they are such fun girls ... I think they're the closest thing to the Spice Girls.''

The 'I Turn To You' singer has also teamed up with up-and-coming artist Peter Aristone to record the track 'Cool As You' and jumped on stage with the singer at the trendy Queen of Hoxton pub in east London last night (12.03.14) to perform the song live for the first time at a free gig.

Peter introduced Mel C as ''the sexiest woman in the world'' and gushed about playing her lover in their new video.

He said: ''It's quite a simple scenario, I'm driving to her house and she's sat on her bed singing 'Cool As You'.

''At the end of the video we meet up, we don't kiss, '' he jokingly added: ''But she kisses me all the time anyway. She's very supportive and we would like to do more together and play live shows.''

Meanwhile, Mel C laughed off the idea of the Spice Girls having a Las Vegas residency, after band mate Emma said it would take more than Britney Spears' rumoured £195,000-per-show to make the girl band reunite again.

'Cool As You' will feature on Peter's forthcoming album '19 Days in Tetbury' and will be released on March 31 with the album coming out in the Autumn.