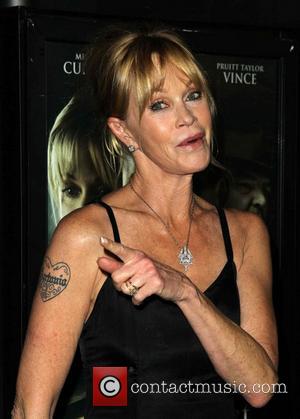 Melanie Griffith wants a fresh start after her 18-year marriage with Antonio Banderas came to an end.

The 56 year-old actress split from her longtime husband last month, and she is now doing everything she can to forget about her former romance.

The 'Working Girl' star was spotted exiting a skin specialist in West Hollywood on Monday (July 7th) with a bandage across her arm, obviously healing from her latest treatment.

Griffith and Banderas, who have been surrounded by breakup rumours for years, first met on the set of 'Two Much' in 1995. In May of 1996, they tied the knot in a very private ceremony in London.

This marks the fourth divorce for Melanie and the second for Antonio.

At the time of their split, the celebrity couple released a joint statement which read;

"We have thoughtfully and consensually decided to finalize our almost twenty years marriage in a loving and friendly manner honoring and respecting each other, our family and friends and the beautiful time we have spent together - Melanie & Antonio."

More: Melanie Griffith And Antonio Banderas 'Had Issues For Years'

According to sources close to the famous couple, their separation was amicable but problems will arise when trying to split their substantial real estate portfolio, which includes multiple properties in the U.S. and Spain.

After being married for 18 years, it was Griffith who filed for divorce, citing irreconcilable differences as the reason.

The legal documents reportedly state that Griffith's wants child support from Banderas, as well as sole physical and joint legal custody of their only child. However, this may prove to be unnecessary as their daughter, Stella, turns 18 this coming fall. Griffith and Banderas split last month after 18 years of marriage