Melissa McCarthy Falls On SNL But Recovers With Style

Actress struggled to cope with her high heels 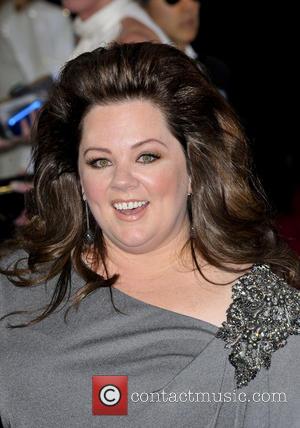 Melissa McCarthy was a huge success when she hosted Saturday Night Live for the first time last year, but she stumbled into the role quite literally this time round.

The comedienne was making her second hosting appearance of the long running comedy sketch show on Saturday night (April 6, 2013) but she was struggling to keep her feet at its beginning, after tottering towards the stage on some sparkly high heels. "I should've tried these shoes on," the Identity Thief star said, reports E! Online, before eventually taking tumble. Which a rehearsed dance number with Taran Killam lined up straight after it wasn’t exactly the best confidence-booster and the star consequently performed the routine on her knees.

"My quads are seizing up," she said. "They told me make sure you practice in your shoes, and I said ‘what? I live in heels,' which wasn't honest. I'm primarily in a Croc." However, once this was all out the way McCarthy shone, bringing forth the LOLs with a comedy parody on The Voice, in which she played an out-of-tune contestant, with Usher, Adam Levine, Shakira and Blake Shelton all chipping in as judges to comment on her terrible performance. Another highlight was the sketch Honey Baked Ham Bake Off, in which McCarthy played an over-talkative baker who went above and beyond getting her passion for pork across. It made for quite the hilarity. Melissa McCarthy took a tumble at the weekend