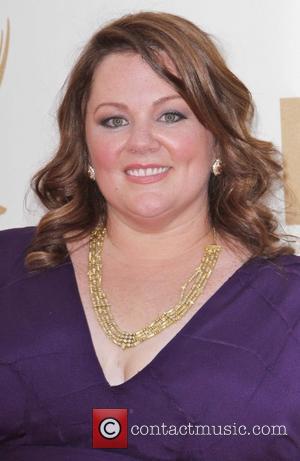 Melissa McCarthy, the American comedienne who caused a major upset by scooping Best Actress in a Comedy Series at the Emmy Awards on Sunday (18th September 2011), has followed up her success by selling a sitcom to CBS, reports Deadline.com.
The actress best known for her role in 'Mike & Molly' and recent starring appearance in 'Bridesmaid', sold her first pilot script the night of the Emmys. MCCarthy and writer husband Ben Falcone will debut their multi-camera comedy project on Cbs, with Warner Brothers TV producing the show. The husband-wife team will co-write and co-executive produce the sitcom about "about a woman in her mid-40s who has a spectacular midlife crisis". Speaking to HBO after the Emmys, Melissa revealed, "The show is about what a midlife crisis means for a woman, which is very different from the way it affects men". Earlier in the evening, the actress had landed the comedy actress award against the odds, beating heavy favourite Amy Poehler as well as Laura Linney and Edie Falco. The 41-year-old is also making the foray into movie writing and recently sold a feature script to Paramount Pictures. She will also star in the Jason Bateman comedy 'ID Theft' and alongside Judd Apatow in 'This is Forty'.
MCCarthy will also make her debut as host of Saturday Night Live on October 1st 2011.