Meryl Streep And Harrison Ford Were Among Six Stars Who Were Celebrated At The Annual British Academy Of Film And Television Arts (Bafta) Britannia Awards. 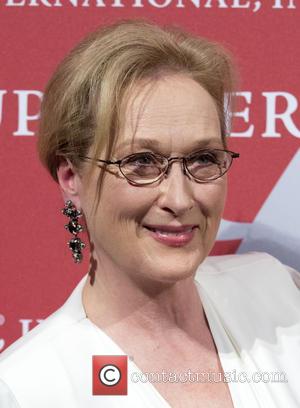 Hosted by British comedian Jack Whitehall, the ceremony began with a standing ovation for Meryl, who received the Stanley Kubrick award for excellence in film during her 40-year career.

With a nod to the hot topic of sexism within the industry, the actress said about the previous winners of the award, "I'm honoured to receive an award that's been given to a distinguished group of men and... men, for a century. I wore the right dress, didn't I?"

Late Late Show host James, who was introduced by his friend Bryan Cranston, used his acceptance speech to persuade Harrison Ford to appear on his chat show.

Honoured with the British Artist of the Year award, he told the audience, "It's humiliating how emotional I feel," before thanking his wife Julia, adding, "She changed my life... and she's so hot. There's a camera on her, right? Look. She's so beautiful. Thank God I'm funny."

Director Sam Mendes, who was taking a break from the Spectre movie press tour, accepted the John Schlesinger Britannia Award for excellence, and offered tips to budding directors who were looking to helm a huge action film like a Bond movie.

He said, "You're playing roulette with someone else's money. If you're going to bet it all on black, be able to explain why... on the day, be prepared. But also be prepared to make s**t up."

Robert Downey, Jr. was on hand to give Orlando Bloom the Humanitarian Award for the actor's work with UNICEF, and Robert joked with the audience about Orlando's alleged bust-up with Justin Bieber over model Kendall Jenner.

"I actually did not connect with Justin Bieber," Orlando said with a smile. "And I actually don't know Kendall Jenner. Though if anyone's got her number, I'd love it."

He then launched into a passionate speech about the work UNICEF is doing around the world to better the lives of disadvantaged children across the world.

Amy Schumer then took to the stage to accept the Charlie Chaplin award for excellence in comedy from Family Guy creator Seth MACFarlane. She told the audience, "I want to thank God, and by God, I mean Meryl Streep."

The last honour went to Hollywood icon Harrison Ford, who was handed the Albert R. Broccoli Britannia award for worldwide contribution to entertainment.

Star Wars: Episode VII - The Force Awakens director J.J. Abrams presented the actor with his award to a standing ovation, but it was Steven Spielberg who got the crowd excited.

In a tribute video to Harrison, Steven said, "I can't wait to work with you on Indiana Jones 5. This is not an announcement, it's just my fervent hope."