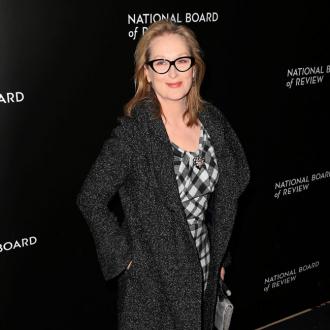 The 'August: Osage County' actress - who received a record 18th Academy Award nomination yesterday (16.01.14) for her role in the drama - joked that she is past her prime at the age of 64 because of the emphasis placed on looks in the western world.

Speaking on ITV's 'Daybreak', she explained: ''I do think in our western culture your worth as a woman is devalued according to how beautiful or not great looking you are. The first thing women say to each other is, 'You look great!' That just isn't the first thing men say to each other. They say, 'How are you?' It's a cliché. The second wife comes because the first one gets old.''

The Hollywood star is proud of her daughters Mamie and Grace pursuing an acting career, despite the unlikelihood of them achieving the same level of success as her.

Quizzed whether it was tough for them to be the iconic Meryl Streep's children, she said: ''For them to choose this profession in spite of that... Many of my friends are nowhere near as successful [as me]. They are equally as talented, as gifted, as energetic, as hard-working, but it just hasn't hit for them.

The actress also admitted that her co-stars are sometimes so intimidated by her that they can't concentrate on set.

Meryl laughed: ''At the first reading of anything, I do have a sense that people are watching me and not paying attention to what they're supposed to be doing sometimes. The first time I forget my lines or read the wrong thing, people relax.''