Susan Boyle has revealed Meryl Streep has been approached to play her in the film adaptation of her life. 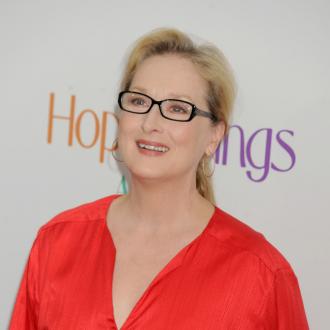 Meryl Streep has been approached to play Susan Boyle on the big screen.

The 'Iron Lady' actress has reportedly been offered a role as the iconic singer, who shot to fame when she auditioned for UK TV show 'Britain's Got Talent' in 2009, in the upcoming movie adaptation of her life.

Scottish singing sensation Susan told the Metro newspaper: ''I wouldn't like to be in the film myself. I'd like someone to play me. Probably Meryl Streep - I understand she has been approached.''

Meryl's alleged involvement comes as a surprise since the 'I Dreamed A Dream' singer previously revealed her top - and only - pick to play herself was 'Harry Potter' favourite Julie Walters, with Hollywood heartthrob, George Clooney, as her manager.

Susan said last year: ''There's only one person I'd love to play me - and that's Julie Walters. She would do the job and you just know she would do my story justice.''

The 52-year-old star has picked up the acting bug after making a cameo appearance in new movie 'Christmas Candle', a role which allowed the singleton to pucker up for her very first on-screen kiss.

Susan added: ''I play church warden's wife. I found it very challenging. I would love to go on and do comedy. I have an outrageous sense of humour.''