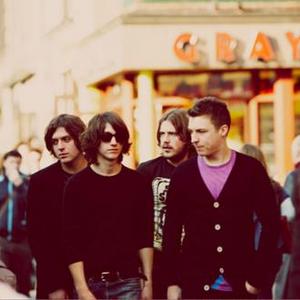 The 'Enter Sandman' group have signed the British rockers to appear at their Orion festival in the US, and while some think they are a weird choice to play alongside a metal band, drummer Lars Ulrich can see the band's hidden heavier side.

He told Rolling Stone magazine: ''For me, having the Arctic Monkeys on there is big. I think they're a heavy metal band disguised as an indie band.

''If you listen to a song like 'Perhaps Vampires Is a Bit Strong But...' there's almost a Rush element in there.''

Lars also said he had to put his rock star influence to work in order to convince Avenged Sevenfold to join them on the bill.

He added: ''Avenged Sevenfold are near and dear to me. They were on the fence about it. They were taking the summer off. I called one of the guys and said, 'It would really mean a lot to us'.''

Other bands on the line up for the Orion festival - which takes place in New Jersey on June 23 and 24 - include Black Angels, SEPULTURA, Modest Mouse, Ghost and Cage The Elephant, and many more.

Metallica will headline both days of the festival, playing their self titled album - widely known as 'The Black Album' - in its entirety on one night, and their second record, 'Ride the Lightning', in full on the other.