Metallica Have Plenty Of Riffs For Next Album 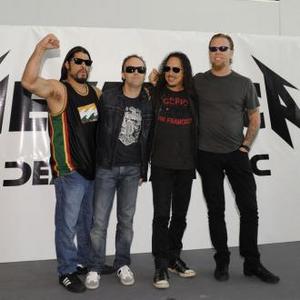 Metallica have ''846 riffs'' ready for their next album.

The ''Enter Sandman' group have been in the studio looking to record the follow up to 2008's 'Death Magnetic' album, and frontman James Hetfield was surprised by how much material he had recorded ready to use.

When asked by Rolling Stone magazine if that was an exact figure, he added: ''In iTunes, you can see how many things you've got. And that does not include the soundchecks, the stuff we goof around with. You

''You plug in an amp. Suddenly it makes you feel good - you come up with a riff. 'Dude, did you get that?' You can't get away from being recorded.''

James admitted he is not even the most obsessed within the group with recording every idea that he has, saying drummer Lars Ulrich is much worse.

He added: ''Lars, the hoarder of Metallica, is obsessed with revisiting every stone, turning it over: 'That could be great!' Yeah, it could all be great.

''But I've got a new one right now. That's the Catch-22. You've got a riff from five years ago on tour that's amazing. Do I still feel it? Don't worry. Something better will show up.''

Metallica will be playing their biggest selling, self titled album, nicknamed 'The Black Album' in full, with the tracklisting reversed, at the Sonisphere festival, which travels across Europe this summer, as well as Download Festival in the UK on June 8.