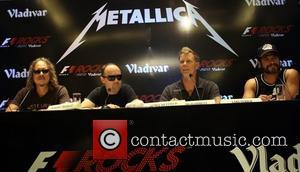 Metallica have revealed the line-up for their second annual Orion Music + More Festival, and as you’d expect from the ageing veterans of heavy metal, it’s one that bristles with more noise and riffs than you can shake a Flying V guitar at.

Over 30 acts have been announced so far for the five stages, with Metallica being joined by the likes of Red Hot Chili Peppers, Rise Against, Deftones and Bassnectar for the two day event that takes place in Detroit on June 8th and 9th. “Last year’s Orion Music + More Festival was hands down the highlight of the Metallica calendar. A great time was had by all, especially the band members,” Lars Ulrich said in a press release reported by Classic Rock “The fact that it also resonated with enough of our fans and friends that it warrants another go-around in ’13 is beyond exciting. I can think of no better place than the Motor City, with its rich and diverse history of music, for the second ride on our Orion festival train. Bring it the f— on!”

With the Chilis joining Metallica as headliners, it marks a potentially busy time for their bassist Flea, who has also been involved in Thom Yorke’s Atoms For Peace project. They released their album AMOK today (February 25, 2013) and he’ll be likely joining them on some live dates as well. Expect plenty of this from Orion Festival

Metallica are back! New album and mammoth world tour confirmed

Metallica, Slipknot and Bring Me The Horizon to headline Download Festival 2023