Metallica promise to return to the UK

Metallica have vowed to return to the UK ''very soon'' following their headline shows at Glastonbury and Sonisphere. 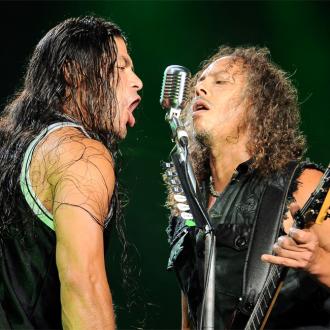 Metallica have vowed to return to the UK ''very soon''.

The heavy metal rockers closed the Sonisphere festival at Knebworth House, Hertfordshire, East England last night (06.07.14) and enjoyed that performance, and their headline slot at Glastonbury last week, so much, they are already planning more British gigs.

Drummer Lars Ulrich said on stage: ''Between last weekend and this one, we always love being back on your shores and we will be back again very soon.''

The group's two-hour set was entirely chosen by fans as part of their 'By Request' initiative and included their version of Thin Lizzy's 'Whiskey in the Jar' and old favourites 'Enter Sandman', 'Master of Puppets', 'Nothing Else Matters' and 'Seek and Destroy'.

They also performed a ''kinda new'' song which is expected to feature on their next album.

Frontman James Hetfield said: ''We have a new song. Well, it's kinda new. We hope you enjoy it. It's called 'Lords of the Summer'.''

Earlier in the day, the crowd was treated to performances from the likes of Mastodon, Alice In Chains, Dream Theater and Gallows.

The previous evening, Iron Maiden headlined in what was the final show of their three-year Maiden England tour.

''This is the culmination of those three years. We should be pretty good by now, if we don't get it right tonight then we never will.''

Slayer, Frank Turner and Sisters Of Mercy were among the other performers on Saturday (05.07.14).