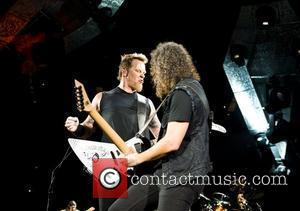 The revelation is something of a volte face for the rock musician, who has been one of the most vocal opponents of The Practice.

However, he said he could not resist downloading the record after it was leaked onto the internet.

"I sat there myself and downloaded Death Magnetic from the internet just to try it," he told VH1. "I was like, 'Wow, this is how it works'. I figured if there is anybody that has a right to download Death Magnetic for free, it's me."

The rock band famously sued file sharing site Napster in a bid to stop music fans getting hold of their music without paying.

Meanwhile, the band were forced to pull out of a gig in Sweden after singer James Hetfield was hospitalised with a stomach bug.