Actress Mia Farrow Is Facing A Backlash Online After Sharing The Business Address Of The Minnesota Dentist Who Illegally Hunted Down A Protected Lion In Zimbabwe. 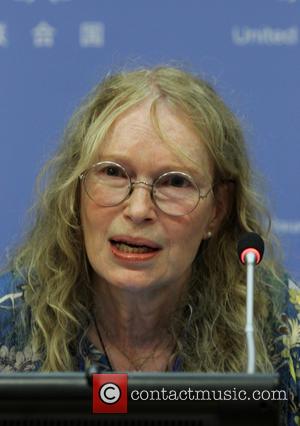 The Rosemary's Baby star was among a host of celebrity animal lovers who were left outraged by the death of Cecil the lion, who was killed with a crossbow by Walter Palmer during a hunting expedition earlier this month (Jul15).

His guides had allegedly lured the big cat, who had become famous for his black mane, out of Hwange National Park, and Palmer subsequently issued a statement detailing his regret, insisting he had no idea the lion had protected status.

Farrow took to Twitter.com to blast the hunter on Tuesday (28Jul15), posting, "Animals are not trophies. Ever", but she went one step further on Wednesday (29Jul15) and publicly tweeted out the name and address of Palmer's dental practice after writing, "CecilTheLion -Gentle protector of 6 cubs. Loved by many. Killed by Dentist Walter Palmer".

The veteran actress has since deleted the address, but only after causing some Twitter users to complain about her message, which a few mistook for Palmer's home address in Eden Prairie.

One disgruntled fan wrote, "I hate what he did, but giving out his address isn't the way to go."

Meanwhile, Sir Roger Moore has penned an op-ed on the death of Cecil the lion for Britain's Telegraph newspaper, titled, "Hunting is a coward's pastime".

In the piece, he voices his support for People for the Ethical Treatment of Animals (PETA)'s boss, who demanded Palmer be "extradited, charged and, preferably, hanged".

He writes, "Not literally hanged, meaning that he would twist in the wind, but that he should face criminal charges. I stand firmly behind her. After all, this isn't Palmer's first time killing exotic animals, and it's not even the first time he has illegally hunted down animals. (He apparently violated American state laws when he killed a black bear in 2006 and then lied to authorities about it.) Clearly, he's gunning his way through the animal kingdom, and who among us feels that we live in a civilised society while he's on the loose? He must be stopped and brought to justice."