An Advert For Fashion House Prada Starring Model/actress Mia Goth Has Been Banned For "Presenting A Child In A Sexualised Way." 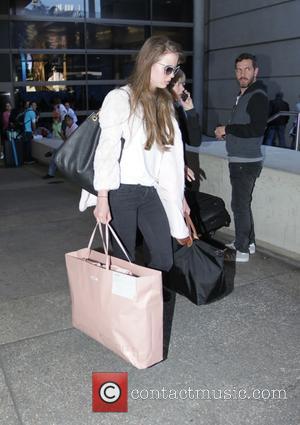 The promotional shot, for the luxury label's subsidiary brand Miu Miu, shows 22-year-old Goth reclining on a bed, wearing minimal make-up in an image photographed through an ajar door.

A complaint was made to U.K. regulatory body the Advertising Standards Authority (ASA) suggesting the advert appeared to show an adult dressed as a child in a sexually suggestive pose, but Prada bosses were adamant the picture showing Goth, who is reportedly engaged to actor Shia LaBeouf, is not sexually suggestive.

Despite the denials, ASA chiefs have upheld the complaint, announcing on Wednesday (06May15) that the fashion campaign should not appear again in its current form as they believe the model does appear younger than her age.

A statement reads, "The ASA noted that the model had a youthful appearance... Elements contributed to the impression that she was younger than 16 years of age... Her pose was sexually suggestive. We considered that her youthful appearance, in conjunction with the setting and pose, could give the impression that the ad presented a child in a sexualised way. Therefore, we concluded that the ad was irresponsible and was likely to cause serious offence."