Michael Buble Is Set To Become A Dad Again. 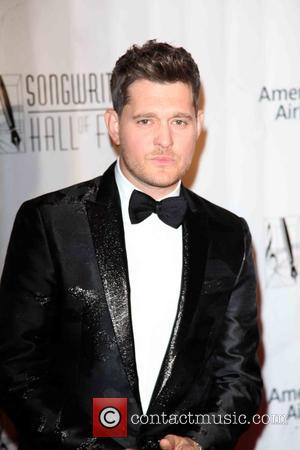 The singer's wife, Luisana Lopilato, is pregnant with the couple's second child.

Buble and Lopilato announced the exciting news on Monday (06Jul15) by posting a video of their 22-month-old son Noah pointing at Luisana's bare belly and saying 'baby' on Instagram.

The crooner captioned the footage, "Noah has some news to tell you..."

The Bubles have just been caught up in a family medical drama after little Noah was hospitalised after suffering serious burns from scalding water in an accident in his mum's native Buenos Aires, Argentina.

His dad recently confirmed the boy had been discharged from the hospital and thanked fans for their support, writing, "We want to thank you for the love and concern you have shown for our little guy through this difficult time. I'm happy to report that he is home, happy and healthy on what turned out to be a great Canada day."

US Magazine: Michael Buble's Pregnant Wife Had "False Alarm," Baby Due "Any ...