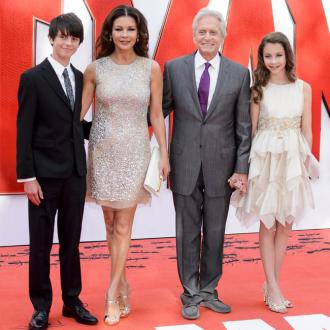 The 70-year-old actor plays Hank Pym in the latest Marvel blockbuster 'Ant-Man' and believes his 45-year-old wife would be perfect for a similar role.

Asked if the Welsh beauty would be interested in playing a superhero, he said: ''I'm sure she might. I'm gonna push her into it because in the story of Hank Pym, he's lost his wife, so maybe she can finally come back and we can finally get to work together.''

However, the 'Basic Instinct' star admitted his wife of 15 years was left unimpressed by his appearance while he shot his Marvel movie because she hated the facial hair he grew for the role.

He confessed: ''Catherine hated the beard so we got rid of that straight after it finished.''

And although the acting legend - who has 36-year-old son Cameron from a previous marriage as well as 14-year-old Dylan and 12-year-old Carys with Catherine - is always inundated with offers to star in movies, he revealed it was Dylan who forced him to take the part.

Speaking at the London premiere, he told the Daily Star newspaper: ''Several of my friends - Danny DeVito and Jack Nicholson - have had experience playing The Penguin and The Joker, and so I never anticipated.

''But when the script came my son just looked me in the eye and said: 'Don't even think about it, you're doing this!'''