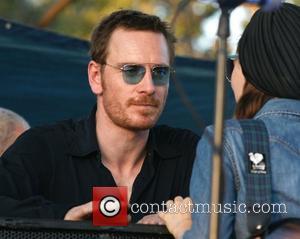 Michael Fassbender appears alongside Maggie Gyllenhaal and Domhnall Gleeson (of Harry Potter fame) in the first photo still of the upcoming film Frank, about the life of musician/television presenter Chris Sievey and his alter ego Frank Sidebottom.

Sievey was known for his musical ventures at first, fronting the band The Freshies in the late 1970s and early 1980s, but became much more well-known for his comic persona Frank Sidebottom, whose paper maché head graced many a television scene from 1984 onwards. Although named after Sievey's alter-ego, the film itself will not be a biopic into his life, but instead will tell a mostly fictitious story about a young musician, played by Gleeson, who joins a pop group fronted by the bizarre and enigmatic Frank.

Lenny Abrahamson will serve as director of the project, whilst Jon Ronson (The Men Who Stare At Goats), a close friend of Sievey, will be in charge of the script. Ronson has been particularly keen to make sure that people knew that the film was inspired by, and not solely about Sievey, taking to Twitter to confirm. On the social network, Ronson said: “The film isn't a film about Frank Sidebottom. It's totally made up and - whilst inspired by Frank - is inspired by other people too. Daniel Johnston and Captain Beefheart are other inspirations. Bowled over that Michael Fassbender and Domhnall Gleeson are in our film.”

The film is set to be released later this year.