Dr. Conrad Murray could be forced to pay Michael Jackson's children $100 million to compensate them for their father's loss of earnings. 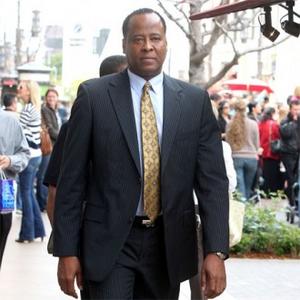 The medic was found guilty earlier this month of the involuntary manslaughter of Michael - who died of acute Propofol intoxication in June 2009 - and the District Attorney believes the singer's three children, Prince, 14, Paris, 13, and 'Blanket', nine, should receive the huge payout.

According to court documents obtained by TMZ.com, the D.A. has asked Judge Michael Pastor to order Conrad pay the money to the kids as they are "entitled to wages or profits lost due to injury incurred by the victim".

The D.A. cites a letter from the Michael Jackson Estate, which estimates Michael would have made $100 million in revenue from the 'This Is It' concert residency which he was preparing for when he died.

Conrad could face up to four years in prison when he is sentenced next week but Michael's brother Jermaine Jackson has previously blasted the proposed sentence as too "soft".

He said recently: "He trusted the doctor and the negligence and everything ... it's really sad because we lost an incredible person. To see and hear the verdict - my mother cried, and we consoled her, and the fans were cheering and everything but it's not bringing Michael back. We lost a brother.

"The sentencing [maximum] was very soft ... to give him two years for taking a life. Forget about Michael Jackson, but taking anyone's life.

"But it happens to be my brother who loved the world and loved people and did so much for the world. He cared about people, human beings, children."