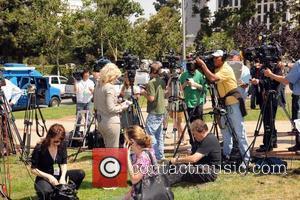 Picture: Atmosphere Media crews converge outside at the UCLA Medical Center where Michael Jackson was taken after suffering a fatal heart attack at the age of...

Michael Jackson's mother KATHERINE will be given custody of the late superstar's three children, according to the family lawyer.
The Thriller hitmaker passed away on Thursday (25Jun09) at the UCLA Medical Center aged 50, after slipping into a coma following a cardiac arrest.
The star is survived by his three children Michael Joseph Jackson. Jr, who he later dubbed Prince, 12, and Paris Michael Katherine Jackson, 11, from his marriage to ex-wife Debbie Rowe, and Michael Jackson II, known as Blanket, seven, who was delivered by an unknown surrogate mother.
Jackson's former partner gave up her rights to her two kids after their divorce in 1999, with the superstar being handed full custody, and Rowe is believed to have had little contact with the youngsters since the split.
The children are believed to be staying with a nanny in Los Angeles as they cope with the sudden death of their father, and the Jacksons' longtime lawyer Brian Oxman admits they could now be permanently cared for by the star's mother.
He tells Radar Online, "Probably Mrs. Jackson will take care of them, she loves them dearly. Everyone is crying and it’s very sad."
The star's manager Frank DiLeo, adds to People.com, "The kids are very upset, but they are fine."