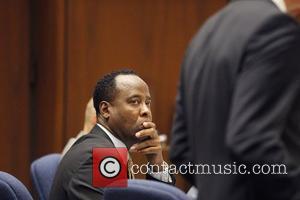 Picture: Dr. Conrad Murray sits at the defense table during his involuntary manslaughter trial at the Los Angeles Superior Court on October 7, 2011 in downtown...

The controversial Michael Jackson tribute concert goes ahead later today (October 8th) in the Welsh capital of Cardiff with the late King of Pop's children set to be in attendance at the Millennium Stadium.
The event, which includes Christina Aguilera, Cee-Lo Green, Smokey Robinson, Leona Lewis and JLS, has been criticised by Jackson's brothers JERMAINE and RANDY who feel that the timing of the event is inappropriate and ill-timed given the ongoing trial manslaughter trial against doctor CONRAD MURRAY - sister Janet Jackson will also be absent.
However, alongside other siblings Tito, MARLON JACKIE and LA TOYA - who'll be performing together - it's also now expected that the performer's children, MICHAEL JR, PARIS and PRINCE MICHAEL II, will also be there, reports the BBC. Speaking of her own involvement in her brother's tribute concert, the previously retired La Toya said "I have put musical performance behind me for roughly two decades. But there will never be another magical moment such as this to celebrate Michael with his fans to perpetuate the importance of his legacy," adding, "I am honoured to share the state with the incredible performers in this line-up, and am certain nothing would make my brother smile bigger or brighter than this tribute concert."
Meanwhile, one of the organisers Paul King has had to insist that ticket sales are still on course to sell out the 50,000 capacity, despite the withdrawal of Black Eyed Peas. "All of a sudden, this week, it's exploded and we were selling a thousand tickets and hour yesterday," he told BBC Radio Wales.