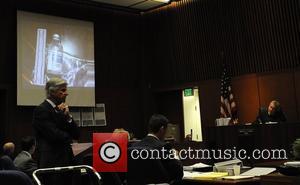 Picture: A picture of a propofol bottle found in Michael Jackson's home is projected onto a screen as Defense attorney J. Michael Flanagan (L) questions Dr....

Late superstar Michael Jackson has topped a Halloween-themed online poll to find the scariest song ever recorded.
The King of Pop's 1984 classic Thriller was named the creepiest tune by editors of Billboard.com, seeing off competition from party favourite Monster Mash by Bobby 'Boris' Pickett & the Crypt-Kickers.
Third place was claimed by Ray Parker Jr.'s track Ghostbusters, while Warren Zevon's Werewolves of London and AC DC's Highway to Hell rounded out the top five.
Runnin' With the Devil by Van Halen and Witchy Woman by the Eagles also made the top 10.