Paris Jackson, Daughter Of Michael, To Star In Debut Movie 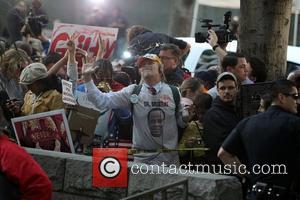 Paris Jackson, the daughter of late pop king Michael Jackson, has reportedly signed up for her first movie role. The 13 year-old is set to appear in fantasy film 'Lundon's Bridge And The Three Keys' which is set for general release in 2013, reports The Press Association.
The film is an adaptation of a book by author Dennis H Christen, which focuses on the love of a family and the strength it brings them. Jackson will be just 15 when the film is released, something that The Huffington Post reports was initially against the wishes of her family, who wanted the child to wait until she was 18 before making the foray into acting. However Jackson allegedly persuaded her grandmother, 81 year-old Katherine. Apparently all of her siblings are interested in the film business, elder brother Prince Michael has spoken of his desire to become a director, filming home videos with Paris and the youngest of Michael's children Blanket.
In any case the news will provide a welcome point of focus for the Jackson family following months of concentrating on the saga that followed Michael's death and the court case that saw DR Conrad Murray convicted of involuntary manslaughter.