Hit London Stage Show War Horse Is To Close After A Eight-year Run In March (16). 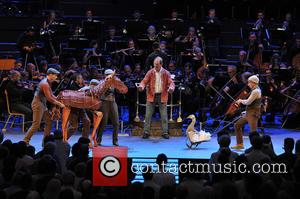 The curtain will come down on the play, which was adapted from Michael Morpurgo's story about a horse's heroism during World War One, for the last time on 12 March (16), ahead of a planned 2017 British tour.

More than 2.7 million people have seen the show, which was also a hit on Broadway, where it won the Tony Award for Best Play, and in nine other countries.

The book and play was also adapted for the big screen and became a 2011 movie, starring Jeremy Irvine, Benedict Cumberbatch and Tom Hiddleston.

Announcing the news of the show's end, author Morpurgo said, "Great things from small beginnings grow. Tom Morris and Marianne Elliott dared to take a children's book about a horse and a boy in the First World War, and make a play of it with puppets. But what puppets!

"Between them, the National Theatre and Handspring Puppet Company have transformed the use of puppetry in theatre. They wove into their play the design of Rae Smith, the music of Adrian Sutton and John Tams, glorious lighting and sound, and spent two risky years putting the show together... It has moved millions in London and all over the world."