Michael Parkinson is using his celebrity to help other men with health issues. 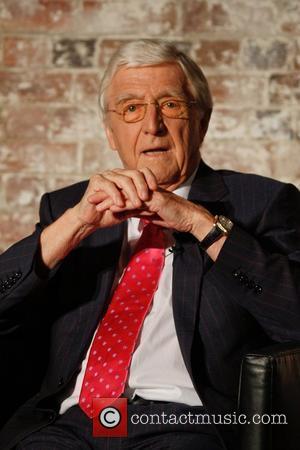 Michael Parkinson's cancer specialist has assured him he will not die of the prostate cancer he was diagnosed with in May. The legendary chat show host, 78, is expected to be given the all-clear within weeks after spotting the cancer early. "I had to start calling a few of my social engagements to tell them I couldn't do it - what do you say to them?" he said, "When you are told you have something like cancer, it is a shock."

Nevertheless, Parkinson is remaining optimistic and says his specialist assures him the cancer is confined to his prostate, "The cancer specialist said: 'I will assure you, you will not die of this.' I am concerned about it, of course, but I am not frightened of it" adding, "I shall be around for a while yet, to the delight of my friends and the dismay of my enemies."

More than 40,000 men in the UK are diagnosed with prostate cancer and around 250,000 are currently living with the disease. Common symptoms include frequent trips to the toilet though reduce flow of urine. Sir Michael has been outspoken on the need for men to pay attention to their health in a bid to catch diseases early. He said: "The test is if you can pee against a wall from 2ft, you haven't got it..I don't want to trivialise it, but men know when there's a problem. I have been lucky, but men are silly about their health.Get it checked out - it might be something else." Owen Sharp, chief executive of charity Prostate Cancer UK, praised Parkinson for speaking out about his cancer. He said: "We wish Sir Michael all the best and a full and speedy recovery.We are really grateful and pleased that he has been open enough to talk about his disease. One of the big things about prostate cancer is it is a very common cancer, yet we don't talk about it enough."

Often described as great British talk show host, Parkinson presented his chat show from 1971 to 1982 and 1998 to 2007, interviewing some of biggest names in the entertainment, political and sporting worlds.  A couple stand out:

Muhammad Ali sparring with Parkinson will certainly go down as one of the most entertaining celebrity interviews of all time. The pair begin jostling for power, though the savvy Yorkshire (just about) manages to tame the beast.

Of course, Parkinson's interview with Meg Ryan is also one of the host's most memorable accounts. Whereas Ali was media savvy and funny, Ryan proved an awkward customer, offering only short answers and refusing to speak on certain subjects. Parkinson's questioning of Oliver Reed - the Hollywood actor known for his drunken interviews - will go down as one of the most revealing and personal interviews of all time. A sober Reed turned up with some hilarious and interesting tales, perfectly complementing Parky's laid-back style.