The current co-host of 'Live! With Kelly and Michael' is liekly to sign a deal to join the crew of 'Good Morning America' very soon. 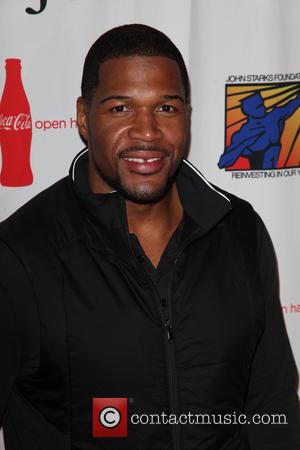 Michael Strahan, who played for the New York Giants for 15 years, is joining the morning talk show 'Good Morning America.'

The 42 year-old is on the verge of signing a new deal to join the breakfast crew as a co-host permanently, according to the NY Daily News.

"They're on the verge of signing the deal," a source reportedly told the newspaper. "It could be announced this week."

With this new deal, Strahan would be able to still keep his current position as co-host of 'Live with Kelly & Michael,' while working on his new job at 'GMA'.

The ABC News executives have been ironing out this deal with the former NFL star for several months.

The deal is expected to be announced later this week, and it isn't a secret that the current 'GMA' line-up could do with an extra man on the show, as it currently stands as four women and George Stephanopoulos.

Earlier this week, Josh Elliot, who featured on the morning show since 2011, parted ways with ABC to join their rival network NBC, as a host and sports correspondent.

ABC was first interested in hiring Strahan after he covered several shows for Roberts when she was battling myelodysplastic syndrome, a disease of the blood and bone marrow.

"They've been in love with him since he subbed for Robin," the source added.

Strahan first got a gig in the hosting game in 2012 when he was given a permanent position on 'Live with Kelly & Michael.'

The former athlete was chosen due to appearing on the show as a guest 20 times over two years, he would regular take the seat next to Kelly when her former co-host, Regis, was unable to work.

Strahan's new deal with 'GMA' could be announced sometime this week. Michael has been co-hosting alongside Kelly since 2012